Why I will never support hudud in Malaysia – Azrul Mohd Khalib 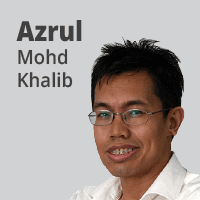 MARCH 19 ― The tabling of the Shariah Criminal Code Enactment II 1993 (Amendment 2015) in the Kelantan State Assembly and any move to amend the Federal Constitution to allow for the implementation of hudud at the State and Federal levels needs to be opposed by all right thinking Malaysians.

Personally, I will never support the imposition of hudud in this country. These are my four reasons:

Hudud is not needed in Malaysia. The law should be and is more than just about punishing others. It is about the deliverance of justice.

The penal laws at the centre of hudud were written during a time when harsh measures were necessary to impose peace, order and stability amidst a period of lawlessness, conflict and turmoil. They were guidelines for civilised behaviour formulated when and where there were few laws and men. Hudud was necessary there and at that time. Today, in our country, hudud law is neither necessary nor required.

We already have civil and criminal laws which provide for separate sets of laws and punishments. One of the primary tenets of Islam is about the deliverance of justice. The discourse surrounding the adoption and implementation of hudud in this country has barely made justice a mention, much less a priority. It has, however been very much about politics, punishing other people and posturing to “out-Islam” each other.
The adoption of hudud into practice, to me, would represent a failure of our existing legal systems to deliver justice. It would also represent a repulsive need to show others how Islamic we are and how holy we can be at the cost of signing away the liberties and freedoms of others.

Instead of delivering justice, hudud would compromise our existing systems and result in situations which cannot be easily explained away by holy verses and theological arguments.

Lack of accountability, transparency and standard of care. Our religious department officials have hardly been paragons of these virtues. Whenever these issues are brought up, they have bristled with outrage, indignation and accused others of undermining or questioning their authority.

Jakim’s Director General Datuk Othman Mustapha recently denounced the questioning of religious authorities as being part of a liberalism movement. As if you needed to be part of an ideology, belief system or movement, to be able to ask questions and demand accountability and transparency from civil servants who are paid with our (Muslim and non-Muslim) tax money.

In 2012, an amendment was made to the Mufti and Fatwa (Kedah Darul Aman) Enactment 2008 by the Kedah state government and passed unanimously by the State Legislative Assembly. The amendment made any fatwa of the state Mufti or Fatwa Committee, whether gazetted or not, unable to be challenged, appealed, reviewed, denied or questioned in any civil or Shariah court. In short, approving a measure which would effectively put a fatwa above the law and above the Federal Constitution.

Consider the case of Nik Raina who has been pursued relentlessly by the Wilayah Persekutuan Religious Department (JAWI) despite a defective charge. JAWI’s actions were determined by three courts of law (civil and Shariah) to be illegal, of bad faith and unconstitutional. Yet they still are pursuing her after three years. This case has been the very definition of injustice and a neglect of the standard of care required of a legal criminal case. Instead they have been dependent on the tactics of bullying, intimidation, fear and oppression in the hope that they can beat Nik Raina into submission and defeat.

Based on recent examples and their behaviour, the parties involved in the discussion of hudud which include religious authorities, thus far have been anything but transparent and open with their intentions. They feel that they are above criticism. That they can do no wrong and are infallible. They feel themselves accountable to no one and need not explain themselves. That to criticise them is to question Islam.

Peddling away fundamental freedoms. There is a reason for the Shariah system to be where it is under the Federal Constitution of Malaysia. Imposition of the hudud law involves changing the very agreement in which this country was founded on.

Make no mistake, the attempts to rewrite the Constitution are no longer silent.

Those who make the self-righteous claim to the mantle of champions and protectors of Islam seem to not hesitate to peddle away our freedoms and liberties at the altar of politics. Such repulsive behaviour is not the exclusive domain of one particular party but can be seen across the chamber and even in the civil service.

There will be those who will ask, why should you be afraid if you have nothing to fear? We know all too well that we have much to fear when the state becomes engrossed in persecuting its own people, looking for sin, finding fault where there is none, jumping at shadows and imagined threats. We have seen enough evidence of it.

Anyway, why should being a Muslim make it alright to be tyrannised and inflicted with injustice?

Do Muslims not have the right as non-Muslims to equal protection and treatment under the law? Are we as Muslims to be deprived of rights and freedoms guaranteed under the Federal Constitution simply because of our religion? Why do we allow ourselves to be subject to possible bias, discrimination and religious tyranny?

Implementation of hudud will, without any doubt, affect all regardless of religions, ethnicity or creed. Non-Muslims should not and must not be silent just because they are allegedly not affected by the proposed laws. The eroding of our fundamental freedoms and civil liberties in the name of religion, affects everyone.

We must not allow these people to sacrifice our fundamental freedoms and rights for votes which will last only so long as the next election cycle or the setting of the sun. In these circumstances, there is no such thing as kasi chance lah. What is taken away will be very hard to be given back. If implemented, hudud will change our way of life as we know it in Malaysia.

Unjust means do not equate to Islam and justice. The reasons used to justify the imposition of hudud have not evolved far from “It’s God’s law!” and calling those who criticise its imposition as liars, infidels and munafik. This lazy defence of hudud not only amounts to religious blackmail to accept it wholesale but also implies that questioning it makes a person less of a Muslim in the sight of God.

These are some of the arguments which the champions of hudud in this country depend on.

The great Islamic caliphates of old held great stock in intellectual curiosity and debate. Religious leaders back then were often also lawyers, students of jurisprudence, mathematicians, astronomers, medical doctors, philosophers, explorers and teachers. They were wise men and women who drew on the lessons of the world to decide when to use the spoken word, the pen and the sword to arbitrate and administer justice. Compare them to who we have enforcing religious laws in this country today.

The Quran also clearly states that there is no compulsion in religion. Yet, those who fight for hudud in this country tolerate no dissent or contrarian opinions and require unthinking, unblinking and blind obedience. When people tell you that you shouldn’t or are not allowed to use your mind or akal to reason or rationalise these issues, you know, you have a problem. They want unquestioning compliance and obedience.

Yet, the first word revealed to the illiterate Prophet Muhammad (pbuh) was Iqra, which means read or recite. It implies the need to learn. That there should neither be blind adherence nor unthinking compliance. Doing so would make us vulnerable to abuse, exploitation, bigotry and injustice which are all too human.

And as those who enforce hudud are human, they are neither infallible nor free from bias or prejudice. Vulnerable to ego and pride. Sins of arrogance, takbur and bongkak. We have seen evidence of this in the Nik Raina case.

How can we also trust these same people to implement and enforce a criminal code when they have barely been able to keep up on matters such as ensuring the rights of women on issues of inheritance, divorce and child custody?

Finally, let us not be naïve in thinking that non-Muslims will not be affected by these measures. The contents of a Department of Islamic Development Malaysia (Jakim) strategic paper which states that hudud should be applicable to all, Muslims and non-Muslims alike, tells me that regardless of whether there is the requisite two-thirds majority support in Parliament, there are people working actively behind the scenes to make this universality a reality. The words of a former Chief Justice bring to mind how far up such sympathies can go. We cannot afford to be complacent. This is not just a political issue. This imposition affects all of us.

Muslims and non-Muslims have a right to speak out as we, as Malaysians, are all stakeholders of this country.

At the end of the day, it is beholden on us as citizens of this country to decide how Malaysia should be. We look to the Yang Di-Pertuan Agong and the Sultans to safeguard the interests of all citizens, Muslims and non-Muslims.

For me, I will not subject myself or those who I care for and love to those who would use God’s name in vain in their overzealous pursuit for godliness and to demonstrate their individual or collective piety.

For all these reasons, I will never support hudud in Malaysia and I will resist any measure which seeks to change the fundamental nature of Malaysia and its people.

*This is the personal opinion of the columnist.