ALL SYSTEMS GO FOR PASMA:

PAS members who are “eager” to work with Umno will have their political careers in the Islamic party cut short, and history attests to this, PAS central committee member Mujahid Yusof Rawa said yesterday.

Speaking at a forum organised by the newly formed NGO Persatuan Ummah Sejahtera Malaysia (PasMa), Mujahid categorically stated that PAS officially has no intention to work with Umno, despite widespread suggestions otherwise.

“I don’t deny there are forces from Umno who are trying to cause a split within PAS itself. But history shows that those who are trying to work with Umno would have their careers in PAS ended,” he told a hall packed to the brim at the Kuala Lumpur and Selangor Chinese assembly hall.

PasMa is an NGO made up mostly of PAS members who want to ensure PAS stays with Pakatan Rakyat.

About 500 people, mainly from Pakatan parties, attended the forum, with some sitting on the floor to listen to panelists talk.

The forum marked the launch of a new movement within PAS that is clearly unhappy with the conduct of the party’s president Abdul Hadi Awang and other conservative leaders. 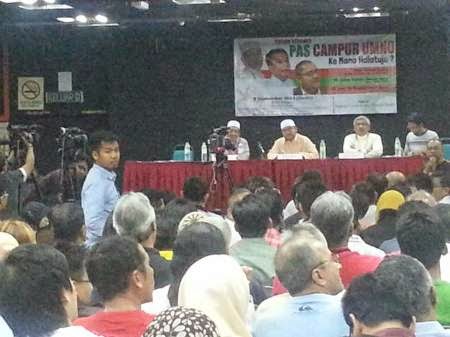 Hadi was previously reported to have tried to entice PKR deputy president Azmin Ali to be Selangor Menteri Besar and form a unity government in Selangor with Umno.

Mujahid, however, stressed that many “assumptions” have been made about the party and pleaded to the crowd that only its official stand should be counted.

“We had decided in the central committee meeting, for example, that we will reject the MB’s post if offered. Please listen to our official stand,” Mujahid said.

The Parit Buntar MP stated that “no one is infallible” and “the central committee cannot be undermined” despite repeated questioning from the floor on Hadi’s open defiance of the central committee decision by originally sending a list of only PAS members to the Selangor palace.

Meanwhile, constitutional expert Abdul Aziz Bari, who also sat on the panel at the PASMa forum, expressed his worry that if the Selangor palace continues to interfere in the process of choosing a new MB, there might be “no remedy.”

“You cannot bring this to court. What the palace is doing is deviant from the consistent practice,” he said.

Abdul Aziz, warned that if the palace opts for an MB who does not hold a majority in the state assembly, it could stand to face “embarrassment” if the appointed MB is voted out in a vote of no confidence.

“It would be an embarrassment to the palace. The sultan would then need to re-appoint the MB,” Abdul Aziz said.

No confidence vote but will the Palace care?

The other member of the panel for the night was PasMa president Phahrolazi Zawawi, a PAS assemblyperson in Kedah.

Phahrolazi stressed that at the moment, PasMa does not intend to be a political party and would remain as a NGO.

“PAS is saying that it remains committed to Pakatan Rakyat, but at the moment we are not seeing enough action to back this up,” he said.

PasMa said that it had identified all the state leaders for every state arm as the movement gathers momentum, and the first liaison office is to be launched in Pahang.

The launch will ironically take place in Temerloh, Pahang, whose MP is PAS’ Nasruddin Hassan, a vocal supporter of Hadi. – Mkini