Christiaan Snouck Hurgronje (8 February 1857 – 26 June 1936) was a Dutch scholar of Oriental cultures and languages and Advisor on Native Affairs to the colonial government of the Netherlands East Indies (now Indonesia).

Born in Oosterhout in 1857, he became a theology student at Leiden University in 1874. He received his doctorate at Leiden in 1880 with his dissertation ‘Het Mekkaansche Feest’ (“The Festivities of Mecca”). He became a professor at the Leiden School for Colonial Civil Servants in 1881.

Snouck, who was fluent in Arabic, through mediation with the Ottoman governor in Jeddah, was examined by a delegation of scholars from Mecca in 1884 and upon successfully completing the examination was allowed to commence a pilgrimage to the Holy Muslim city of Mecca in 1885. He was one of the first Western scholars of Oriental cultures to do so.

A pioneering traveler, he was a rare Western presence in Mecca, but embraced the culture and religion of his hosts with passion, converting to Islam.

In 1889 he became professor of Malay at Leiden University and official advisor to the Dutch government on colonial affairs. He wrote more than 1,400 papers on the situation in Atjeh and the position of Islam in the Dutch East Indies, as well as on the colonial civil service and nationalism.

As the adviser of J. B. van Heutsz, he took an active role in the final part (1898–1905) of the Aceh War (1873–1913). He used his knowledge of Islamic culture to devise strategies which significantly helped crush the resistance of the Aceh inhabitants and impose Dutch colonial rule on them, ending a 40 year war with varying casualty estimates of between 50,000 and 100,000 inhabitants dead and about a million wounded.

His success in the Aceh War earned him influence in shaping colonial administration policy throughout the rest of the Dutch East Indies, however deeming his advise insufficiently implemented he returned to the Netherlands in 1906. Back in the Netherlands Snouck continued a successful academic career.

When the colony of the Dutch East Indies (now: Indonesia) was founded in 1800, the dominant monotheistic religion of most of the indigenous peoples of the Indies Archipelago was Islam. Due to strong religious syncretism this form of Islam mixed with elements from older religious beliefs. Arab merchants and Indigenous haji pilgrims returning from Mecca, increasingly advocated a more orthodox interpretation of Islam. This led to the rise of the strict ‘santri’ variant of Islam. The nominal Muslims were called “abangan’.[1]

Most Christian churches adhered to the guidelines set by the colonial government. The Protestant and Catholic mission showed due diligence in following government strategy, but nevertheless enjoyed considerable autonomy. Moreover Dutch colonialism was never grounded in religious zealotry. However during the 19th century Christian missionaries became increasingly active, regularly leading to clashes or frictions, between Christianity and Islam and between the different Christian denominations.[1]

The relationship between the government and Islam was uncomfortable. The Dutch colonial power used the principle of separation of church and state and wanted to remain neutral in religious matters. Nonetheless equally important was the desire to maintain peace and order and Islam was an early source of inspiration to revolt against the colonial administration. Social and political motives intertwined with religious desires repeatedly exploded into riots and wars like the Padri War (1821–1837) and Aceh War (1873–1904) in Sumatra.[1]

Life in the Dutch East Indies

As of 1871, the colonial Governor-General relied on an ‘advisor for indigenous affairs’ to manage these tensions. Due to his expertise in Arabic and Islam, Dr. Snouck Hurgronje served in this capacity between 1889 and 1905. His overall advice was to intervene as little as possible in religious affairs and allow optimal freedom of religion. Only manifestations of political Islam were to be countered. Although his advise was implemented and guided colonial policy for years to come, the emergence of Sarekat Islam in 1912 gave rise to the first East Indies political party based on Islamic principles.[1]

Aspiring to reform Dutch colonial policies, Snouck moved to the Dutch East Indies in 1889. Snouck was originally appointed as researcher of Islamic education in Buitenzorg and professor of Arabic in Batavia in 1890. Although at first he was not allowed to visit Aceh on Sumatra, he rejected offers to return to Europe from the University of Leiden and Cambridge University. In 1890 he married the daughter of an indigenous nobleman in Ciamis, West Java. Due to the controversy this caused in the Netherlands, Snouck called the marriage a “scientific opportunity” to study and analyse Islamic wedding ceremoniwa. Four children were born from this marriage.

Between 1891 to 1892, Snouck—who was by now fluent in Acehnese, Malay and Javanese—finally traveled to Aceh which was devastated by the prolonged Aceh War. Under the name “Haji Abdul Ghaffar”, he built a relationship of trust with religious elements of the region’s population. In his Report on the religious-political situation in Aceh, Snouck strongly opposed the use of military terror tactics against the Acehnese and instead advocated well-organized systematic espionage and winning the support of aristocratic elites. He however did identify certain radical Muslim scholars (Ulama) that would only succumb to show of force.[2]

In 1898 Snouck became Colonel Van Heutsz‘s closest advisor in “pacifying” Aceh and his advice was instrumental in reversing Dutch fortune in ending the protracted Aceh War. The relationship between Heutsz and Snouck deteriorated when Heutsz proved unwilling to implement Snouck’s ideal for an ethical and enlightened administration. In 1903, Snouck married another indigenous woman with whom he had a son in 1905. Disappointed with colonial policies, he returned to the Netherlands the next year to continue a successful academic career.[3]

Back in the Netherlands Snouck accepted several professorships at Leiden University, including Arabic language, Acehnese language and Islamic education. He continued to produce numerous elaborate academic studies and became the international authority on all matters relating to the Arab world and Muslim religion. His expert advice on urgent issues was often sought after by other European countries and much of his work was already being translated into a.o. German, French and English. In 1925 he was even offered a professorship at the prestigious National Egyptian University in Cairo, the prime university of the Middle East. In 1927 he stepped down as Rector magnificus and professor, but stayed active as adviser up to his death in Leiden in 1936.[4]

During and after his academic tenure Snouck remained a progressive colonial adviser and critic. His reformist vision to solve the challenges of a lasting relationship between the Netherlands and the Indies was based on the principle of association. To achieve this future association and end the existing dualist governance of the Dutch East Indies, he advocated increased autonomy through western education of the indigenous governing elite. In 1923 he called for: “Vigorous reform of the constitution of the Dutch East Indies” where “one has to break with the concept of moral and intellectual inferiority of the natives” and allow them “free and representative democratic bodies and optimal autonomy”. Conservative elements in the Netherlands reacted by financing an alternative school for Colonial Civil Servants in Utrecht. [4]

The main data on Snouck Hurgonje’s studies and colonial policy relating to Islam are available in the archives of the ‘Ministry of Colonies’ managed by the ‘National Archives’ in The Hague. The archive includes all decisions by the governors-general, all Minister of Colonies mail reports, and all government laws and regulations. Additionally data is available in the Indonesian National Archives in Jakarta and at the ‘Royal Institute of Southeast Asian and Caribbean Studies’ (KITLV) in Leiden and the Leiden University Library.[1]

The Leiden University Fund (nl:Leids Universiteits Fonds), dedicated to university reform is located at the ‘Snouck Hurgronjehuis’, Snouck’s home donated to the University. 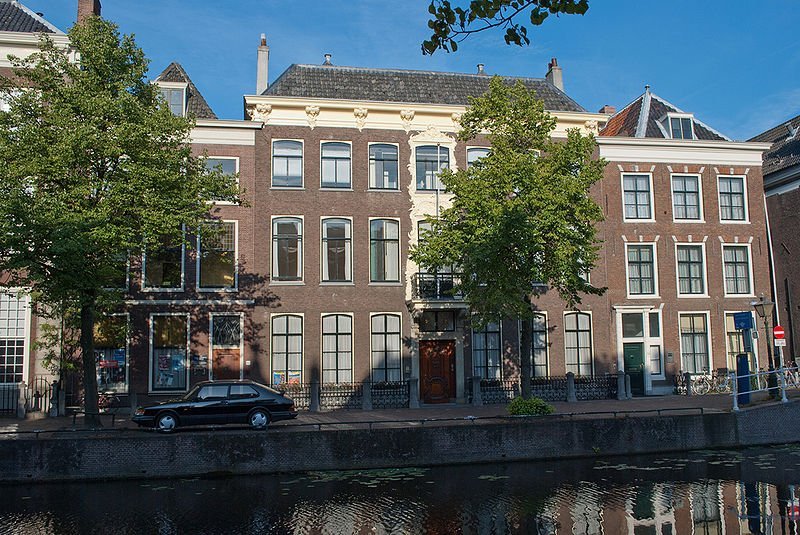 Muslim pilgrims from Palembang, Sumatra on their way to Mecca. Photographed by Snouck Hurgronje at the Dutch Consulate in Jeddah, 1884

Muslim pilgrims from Palembang, Sumatra on their way to Mecca. Photographed by Snouck Hurgronje at the Dutch Consulate in Jeddah, 1884.

Muslim pilgrims from Ambon, Kai and Banda island, Maluku Islands on their way to Mecca. Photographed by Snouck Hurgronje at the Dutch Consulate in Jeddah, 1884.

Muslim pilgrims from Ambon, Kai and Banda island, Maluku Islands on their way to Mecca. Photographed by Snouck Hurgronje at the Dutch Consulate in Jeddah, 1884. 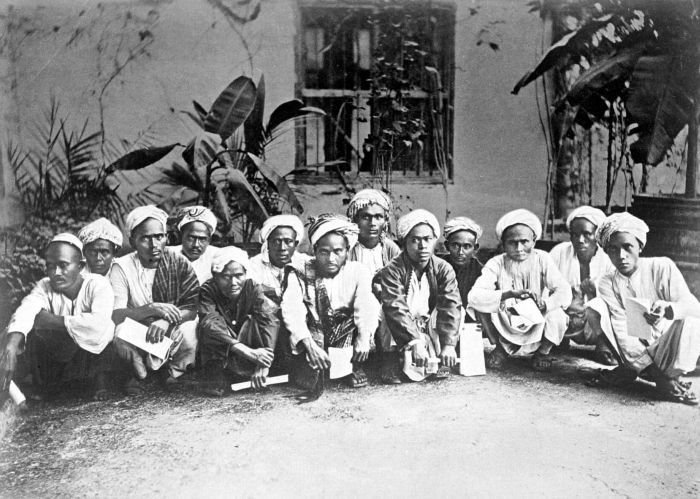 Muslim pilgrims from Mandailing, Sumatra on their way to Mecca. Photographed by Snouck Hurgronje at the Dutch Consulate in Jeddah, 1884.

Muslim pilgrims from Mandailing, Sumatra on their way to Mecca. Photographed by Snouck Hurgronje at the Dutch Consulate in Jeddah, 1884.

Pilgrims from Aceh on their way to Mecca. Picture taken by Snouck Hurgronje in the Dutch Consulate in Jeddah, 1884.

Pilgrims from Aceh on their way to Mecca. Picture taken by Snouck Hurgronje in the Dutch Consulate in Jeddah, 1884. 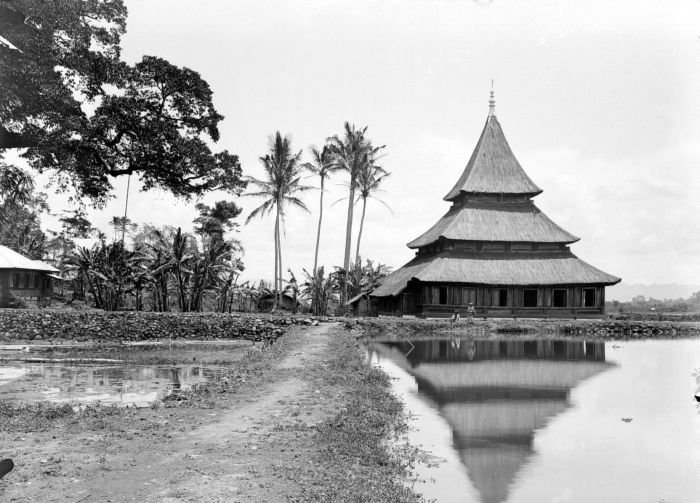